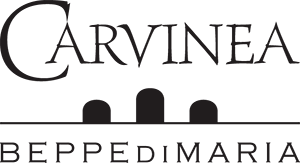 In 1504 Masseria Pezze d’Arena was already in the Great Book of Carovigno. I’m touched by the  idea of walking in the same places where in the 1500s there were already vines producing good wines.

Beppe di Maria’s passion in wine-making came from his childhood memories, which led him to the start Carvinea. This name derives from the Medieval version of today’s Carovigno, meaning “frugiferous”-fruitful- referring to the fertility of its soils, particularly suitable for viticulture.

After identifying the ancient structure in Carovigno in…, Beppe di Maria began the meticulous restoration of this farmhouse (masseria), using only the original materials of that time to give it back to its ancient glory.

Simultaneously the new vines were planted, following the most rigorous procedures; the soil were cleared, fertilized and left to rest. Next came the planting of  the wild cuttings and only one year later the grafting of the autochthonous varieties.

The Carvinea Logo represents the 3 arches of  the Masseria Pezze d’Arena, which are visible from the courtyard.

The slowest and most complex disciplinary regulations are applied for the production of the wine, from the treatment of the soil to the planting of the vines, with a planting layout of 4000 vines per hectare. The maintenance of the vineyard is mostly made by hand.

The careful work carried out in the vineyards grants the production of perfectly healthy grapes, this allowing for each variety to find its best expression.  Over time Carvinea’s wines have been acknowledged with important prizes and awards, this proving that our focus on achieving the highest quality has been rewarded. The quantities produced also reflect our line of work;  with only one bottle of wine for vine.

Use the search box to find the product you are looking for.

No products in the cart.